It’s that time of year again. Time for the “Best of…” lists to start appearing. First up in the land of children’s music is the 13th annual Fids & Kamily Music Awards. Voted on by a stellar collection of folks familiar with the fantastic offerings from the children’s music industry, this list of the Top 10 albums of 2018 for kids and families is a list of “must haves” for every collection. Don’t forget to take a look at the Honorable mentions, they are great ones to have as well. Keep an eye out in the next couple of weeks for the first ever Kids Rhythm and Rock best of the year list. Also on the horizon, the GRAMMY nominations for Best Children’s Album in December, followed shortly thereafter by School Library Journal’s “10 Best Children’s Albums” for teachers, librarians and families. Are there any albums you wished had made the Fids and Kamily list? 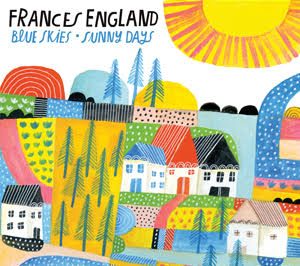 Leave a comment best of 2018, fids and kamily awards 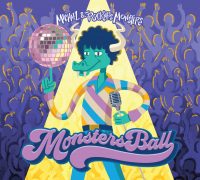 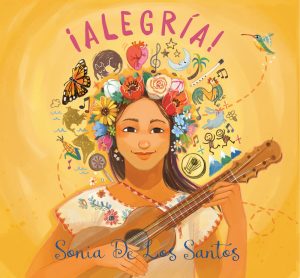 In ¡Alegría! the follow-up to her wonderful album, Mi Viaje: De Nuevo León to the New York Island, Sonia De Los Santos explores the theme of joy and happiness. The term ¡Alegría! literally means joy and in the album’s liner notes De Los Santos brings even more depth to the term by explaining, “In some parts of Latin America it is often used to cheer someone up. We say ¡Alegría! to remind each other that there is something to be happy about. I find this so beautiful.” So do I. Throughout the twelve songs on this album, Sonia reminds us to find the happiness in both the exciting times as well as the quiet moments in the day.

Eight of the songs are originals and feature Latin American rhythms like cumbia, curralo and huayno. A whole host of traditional instruments make appearances as well, like the gaita flute from Colombia which features prominently in “Mariposa Montuna,” that celebrates the incredible migration undertaken by monarch butterflies each year and in “Mi Papa Va a Comprar” that mentions the conga, trumpet, accordion, jarana and kalimba.  Complex vocals are woven together with fast moving melodies to create gorgeous musical tapestries in songs like, “Calibri Amarillo” and “Los Pajaritos.” De Los Santos strikes a well-chosen balance between the quick moving songs and quieter moments by including tracks like “Amopolita” and the English lullaby, “Daisy Mae” featuring beautiful harmonies performed with Elizabeth Mitchell.

Additional songs performed in English include the playful tune “Hey Little Bunny!” featuring Caridad De La Luz aka La Bruja and “Songs for the People,” based on a poem written by African American poet Frances Ellen Watkins in the 1800s, with Dan Zanes and Claudia Eliaza taking lead on the vocals. “Donde Tú Estés, Wherever You Go” is the sole bilingual tune on the album. Originally written in English by children’s folk icons Cathy Fink and Marcy Marxer, De Los Santos has added Spanish translations to the lyrics and the three perform the song together to close out the album.

*A 32-page booklet of liner notes is included with the album. De Los Santos includes an introductory note to each song along with complete lyrics, helping to further enrich the experience of ¡Alegría!.

Experience a taste of the joy from this album with the video for the title track, “¡Alegría!” below.

I have been a big fan of Suzi Shelton’s latest album, Hand in Hand, ever since I first heard it way back in June. The lyrics are fun and engaging and the instrumentation uplifting. This combination makes many of the songs stick in your head so that you find yourself randomly singing them in the shower, in the car, or even at work (being a children’s librarian, no one even gives this a second glance). One of my favorite songs, “The Grass is Always Greener,” now has a green screen video that was shot at YouTube Space NYC to go along with it. Featuring Suzi, her bandmates and a delightful assist from Tim Kubart, this is the perfect way to start off the week. I hope you enjoy it as much as I did.