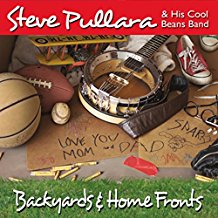 The first time I listen to a new album (I generally listen to each album at least 3 times), I like to go in “blind.” I don’t read the liner notes or any of the accompanying PR. I just listen. This was true of the first time that I listened to Backyards & Home Fronts. With barely a glance at the packaging, I popped the CD in, pressed play and bopped along while I sorted the mail and straightened the kitchen. At the end, I thought, that was nice. Kids will like the song about using your imagination while drawing on the car window with your finger. They’ll be able to relate to the song about playing with a refrigerator box. Many of them will understand the song about the child who is growing older along with a pet.

Then, I read the liner notes and visited Steve Pullara’s website and realized I had it all wrong. So, I listened to the album again. And again. And again. While it is true that the album has universal themes that children can relate to, at the heart of this album lies a beautiful tribute to the children whose moms and dads are in the military and are away from home on deployment. This is an album filled with songs about missed birthdays, wishes and dreams, letters and care packages, and grandmas and grandpas who step in to help fill the void. While the subject matter may pull at the heart strings, the songs are all upbeat and joyous, employing a little bit of country and a little bit of old fashioned rock ‘n’ roll to convey its message.

Many of the songs on this album could be used in lessons or programs about different types of families. This is a welcome addition to all music collections, but is a must have for those libraries and classrooms that serve families in the military. Check out the video below for the joyful final track of the album, “Guess Who’s Coming Home.”

*make sure to have a tissue handy