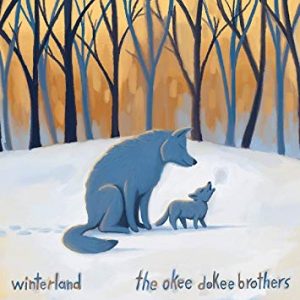 This fall The Okee Dokee Brothers returned with Winterland, the follow-up to their “Adventure Album Series.” This new album finds the GRAMMY Award-winning duo of Joe Mailander and Justin Lansing celebrating the cold and snowy winter season. This collection of 16 songs is a beautiful combination of music that embraces the wonders of this unsung time of year as well as some important life lessons. The album opens with “Blankets of Snow,” a great reminder that the cold weather outside is what leads to the warmth and coziness inside. On the opposite end of the cozy spectrum is “Ice Fishin’ Shack” an ode to a past time that is not for the winter faint-of-heart. And don’t miss the tale of the poor, misunderstood “Abominable Yeti,” who it turns out is an upstanding citizen and overall nice creature.

Musically, the entire album, produced by GRAMMY Award-winner Dean Jones, is a treat to listen to, with The Okee Dokee Brothers signature Americana folk style evident throughout. A few of the unique standouts include “Keep Me Warm” which is inspired by the community singing of traditional Irish songs in local pubs, “Slumberjack,” a song that is a nod to the shanties of Canada’s Maritime Provinces and is their first a cappella number, and the raucous “Howl,” a tune influenced by a dog sledding trip in the Boundary Waters.

Along with the songs lauding winter and all that comes with it, are songs that provide important life lessons. The song “You, You, You” is the most pop sounding track on the album and encourages children to be true to themselves, “And you you you, you were you-ing like/ You do. I just love it when you you.” The circle of life is addressed in “Great Grandmother Tree,” which allows children to talk about death in a less frightening way. And finally, there is “Snowpeople” which asks whether or not we have to “wear” our genders.

Winterland is filled with so much depth. It entertains while also teaches us to love nature and one another all year through.

View the video for “Snowpeople” below and read this interview The Okee Dokee Brothers did with Fatherly about the origin of the song.