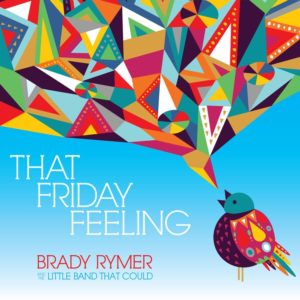 Family music artist Brady Rymer and his fellow performers in the Little Band That Could put the “rock” in kindie rock. From the very beginning of their children’s music career, the group never shied away from featuring electric guitars, keyboards, and drums to create a musical sound that kids and their parents alike would enjoy. With That Friday Feeling, the band’s 12th studio album, that rock and roll tradition continues.

From the first note of the title track to the last beat of the final song, listeners are treated to Rymer’s rockin’ signature melodies combined with lyrics that not only entertain, but emphasize the importance of living lives filled with joy, hope, and kindness. The eleven original songs include ideas for how to cheer someone up, an appreciation for the adorable animal babies of summer, the soft jam that follows the bunny tracks through the snow, and answers to that age-old-question, “If you had a super power, what would it be?” Also included is the beautiful tune, “Outline,” which says that we are simply outlines that are being filled with precious attributes like light and love which are represented by different colors of the rainbow and the upbeat “Gonna Sleep Well Tonight” whose goal it is to get kids moving and dancing and ready to fall into bed. The only cover on That Friday Feeling is “Yes We Can Can,” a funk song about helping one another out that was written by Allen Toussaint and made popular by the Pointer Sisters. Rymer and the Little Band That Could dig right in and give a performance that would make them all proud.

It’s that wonderous time of year when children celebrate the end of school and public libraries launch their summer reading programs. Many libraries create their own themes, while others either use the iREAD theme, which this year is “Read Beyond the Beaten Path,” or the CSLP theme, “Oceans of Possibilities.” Both of these themes are fantastic and encourage young readers to explore worlds beyond their everyday experiences, but the one we’re going to focus on today is “Oceans of Possibilities.”

New Zealand-based Claudia Robin Gunn had no idea when she was planning the launch of her latest album, Sing for the Sea – Little Wild Ocean Friends, that it would perfectly coincide with American summer reading programs, but lucky for us, it does. Gunn’s newest collection of kindie folk is a double album packed with 24 original songs, all written and performed by Gunn. Featuring vocals that elevate her modern take on folk music, Gunn’s voice is at times almost ethereal, making it the perfect companion to lyrics that tell the tale of creatures found deep in the ocean. Each track has its own story to tell and is strengthened by the intentional way that each song focuses on only one creature or aspect of the watery environs. Animals spotlighted on the album include whales, squid, octopus, and jelly fish while rock pools, seaweed, and coral reefs are also shown special treatment. Although each song is packed with scientific facts, they are consistently entertaining and never feel didactic. All encourage listeners to use their imaginations and several like “Pirate Princess,” “Mermaid Parade,” and “Sandcastle Competition” promote the importance of play. 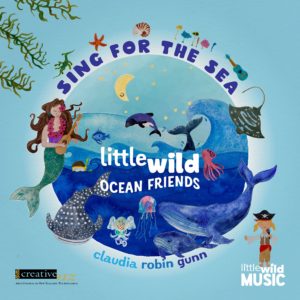 Along with Sing for the Sea – Little Wild Ocean Friends, Claudia worked with her sister Dr. Melissa R. Gunn and award-winning watercolor artist Elise De Silva to create a companion songbook that includes science notes and activity ideas for each song. Originally due out in July, when Claudia heard about the “Ocean’s of Possibilities” theme, she decided to give American audiences a chance to gain early access. The digital songbook and album are available now on Bandcamp (see https://www.claudiagunn.com/sfts for details and to hear a sample). Sing for the Sea – Little Wild Ocean Friends will be available via all the regular streaming services beginning July 8.