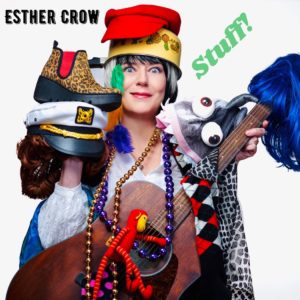 It’s Earth Day! Celebrate this rock we call home with a new, high-octane tune from Esther Crow. Disheartened by ever-growing landfills that contribute to the climate crisis and inspired by purging some of her own “stuff,” Esther wrote this song to encourage families to be greener and consider donating items they no longer want rather than tossing them in the trash. Produced by Dean Jones, this call-and-response rock song which features Esther’s eight-year-old son on mandolin and violin, gets the message across in a gloriously frenetic way. After jamming along, listeners will surely be left with the desire to take a good hard look at all their “stuff.”