Welcome 2018 with Dolly Parton’s I Believe in You 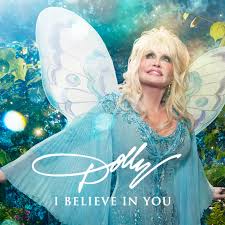 Hello 2018! I have to say, after the hustle, bustle and general stressfulness that comes with the holidays or as the song says, “the most wonderful time of the year,” I was really looking forward to the calm and quiet of January. I don’t generally do new year’s resolutions, but I did make a promise to myself that I would be kinder in thought and reaction toward those around me. Unfortunately, Mother Nature has made keeping that promise a wee bit difficult. Much of the country has been dealing with weird weather the last few days and in Chicagoland, it has been no different. We’ve been in an extreme deep freeze since before Christmas, there was snow, wind and today, ice. With each day like this that passes, I’m finding it more and more difficult to keep my promise of kindness. And that’s what makes Dolly Parton’s latest album so timely.

It’s hard to fathom that in a career that spans five decades, I Believe in You is Parton’s  very first album for children, but it is. The 13 songs in this collection are all written by Parton and many are inspired by books like The Little Engine That Could, which are distributed through her Imagination Library program. In a time where bullies abound and people of all ages are speaking harshly and disrespectfully about one another, songs such as those found in this collection are definitely welcome. This album is filled with themes of friendship, acceptance, having confidence in yourself and others, and love. Included are songs such as “Responsibility” and “Makin’ Fun Ain’t Funny” that teach young children important life lessons as well as the upbeat “Chemo Hero” which tells what life is like having cancer from the point of view of the child. It is an empowering song that is important for not only children who have cancer to hear, but for their friends and family as well. Also included is a track of Parton reading her book, “Coat of Many Colors,” as well as a new recording of the song with the same name.

True country music is not a genre often found in children’s music, which makes Dolly Parton’s album a welcome addition to library collections and family listening. In addition, all proceeds benefit Dolly’s Imagination Library, which over the past 22 years has sent over 98 million free books to over 1 million children in the United States, the United Kingdom, Canada, and Australia. For more information, visit Dolly Parton’s Imagination Library.