Trippin’ Round the Mitten by Randy Kaplan 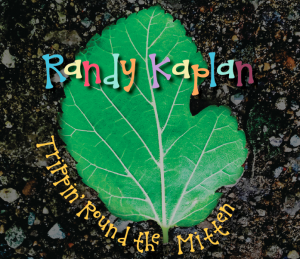 I have to admit, as a Michigander born and raised, Randy Kaplan had me at the title to his newest album, Trippin’ Round the Mitten. This, Kaplan’s sixth not-JUST-for-kids album, is filled with zany fun for the whole family. Clever, sophisticated lyrics lead listeners through the twists and turns of the 18 songs on this hour long album that features a smorgasbord of musical genres. Kaplan kicks things off with the rap heavy “Honk Honk” where you are directed not to squeeze his nose before veering off into a combination of original tunes as well as covers like the The Dead Milkmen’s punk-tinged “Beach Song,” and Maroon 5’s “Sugar,” which now has lyrics that describe the power of a child’s favorite “food group.”

Many of the songs written by Kaplan have subjects that will be familiar to parents and older siblings including a little boy who likes to run around without any clothes on in “Supernude,” the jazzy/funk/rap “Cat & Mice” about the escapades of a Dad and his son when mom is out of town on business, and the fantastic “On the Phone on the Toilet” which first leads listeners to believe this is the tale of a mom who is more interested in her phone than her son, but has a great twist at the end. The title track “Trippin’ Round the Mitten” is the only Michigan-centric song and will delight those who are familiar with the state as Kaplan lists off towns and roads from throughout the entire mitten. Randy’s wife, Julie May, shines on two of the songs, a cover of Pete Townsend’s “Sleeping Dog” and the lovely “Bye Bye Baby.”

No matter where you live, the combination of fun, yet informed lyrics with the wide variety of musical genres makes this an album that families will return to again and again.