Video Premiere “Hard to be Happy” performed by Esther Crow 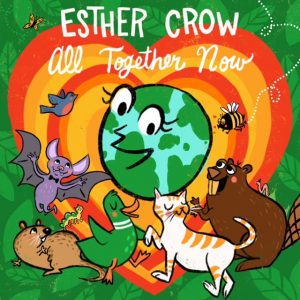 Esther Crow made her entrée into children’s music with her band Thunder & Sunshine’s 2017 album, This is Thunder & Sunshine. Just a handful of years later, Esther returns with All Together Now, her first solo album for families which is set to be released on June 25. The first video from the album, “It’s so Easy Being Green” debuted on May 21 and detailed simple ways we can help the planet by changing our daily habits. Today, I am pleased to premiere “Hard to be Happy,” the second video from All Together Now. 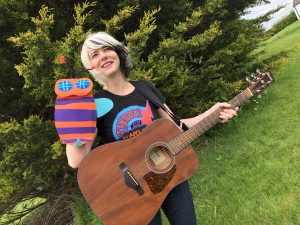 Written in the aftermath of George Floyd’s murder, Esther says of “Hard to be Happy,” “I was hoping to find a way to reach the very young, and to highlight the importance of empathy for others and acceptance of ourselves. I continue to struggle with the fact that people are persecuted for the color of their skin, or for whom they love.” To that end, the video features a conversation and duet between Bernie the Bee and Moonice the Cow, two of Esther’s signature paperbag-style felt puppets.  In “Hard to be Happy” Moonice is struggling with the fact that instead of being black and white, Moonice is red and purple, while Bernie is coming to terms with being a bee who loves anchovies instead of flowers. While each character is facing challenges and things that make them sad, they know that they will be ok because they have each other.

Created by Jeff Lewonczyk, the simple nature of the puppets makes the theme of being yourself in order to be happy even more accessible to young listeners. The static background, puppetry, and music with a message gives “Hard to be Happy” a retro vibe, calling to mind children’s programs of the 70s and 80s. Bernie and Moonice (and Esther too) give listeners much to think about.  “Hard to be Happy” ends with a courage-filled pledge that we should all adopt, “We’ll live our lives unafraid. We’ll be brave.”