My husband and I spent most of this weekend working on rebuilding our deck. Our backyard is ringed by old oak trees and marshland and while we were outside we kept hearing these high pitched long screeches coming from the branches above us. For the first couple of hours we couldn’t figure out what creature could possibly be responsible for such a sound. Then, in the early afternoon we finally caught a glimpse of two young hawks practicing their flying techniques. Were they the source of that unusual bird call? Last night we spent some time online searching out examples of what young hawks sound like, and just like that, the puzzle was solved. Our hawk friends were back again this morning, but now that we knew whose bird call was echoing through the air, it was easier to follow the sound and see the glorious youngsters high in the trees.

This experience very much reminds me of “Sae Taryeong,” one of the tracks from Elena Moon Park‘s most recent album, Unhurried Journey. “Sae Taryeong” is a well known folk song from the southwestern region of Korea that tells the story of birds on a hillside in the spring who are calling to one another. The song’s lyrics are a lovely blend of Korean and English that engage listeners and will have them calling “sook-sook, sook-sook,” back to the sparrows, bluebirds, and robins.

The video for “Sae Taryeong” is a whimsical blend of colors, collage, and video that perfectly captures the song’s celebration of nature in springtime. Created by composer and musician, Natacha Diels, “Sae Taryeong” presents unique imagery not often found in music videos for children. For more information about the song including lyrics and how to listen to bird calls, visit the “Sae Taryeong” page on the Unhurried Journey album website. Enjoy the video for “Sae Taryeong” below and next time you’re outside, take a minute to stop and say “sook-sook” to the birds above. 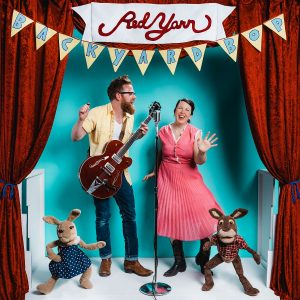 Do you need a pick me up? A return to a time when life wasn’t filled with constant worry and stress? Then Backyard Bop is just the thing for you! This latest album from Red Yarn is filled with original songs that are guaranteed to get the whole family moving and singing along. The collection kicks off with the rockabilly dance party title track before sliding into the high energy “Jump for Joy,” which reminds us that even though life is hard right now, there are still lots of reasons to be joyful, and what better way to celebrate than with lots and lots of jumping. There are several nods to animals including in the uptempo folk rock “Critters in My Garden” (boy can I relate to that!) and the celebration of “Cats & Dogs.” Woven throughout the album are several ways to enjoy the simple things in life as well. These include a beautiful song about watching the amazing show that nature puts on “Outside My Window,” saying hi to old friends, making new ones, and caring for one another as you roll “Around This Town” (featuring Mo Phillips and Aaron Nigel Smith), and using your imagination to go on all kinds of incredible adventures in “My Own Backyard.” In addition, “Town Hall Meeting” is the perfect song to help children understand that while it’s important to stand up and have your voices heard, it’s equally important to respect one another even when we disagree. Backyard Bop is a fantastic addition to Red Yarn’s catalog of music. Take a listen, share it with a friend, take a moment to look out the window, then jump and dance and spread some joy!

Welcome to Shark Week! However, rather than highlighting a song about a family of sharks, instead I want to shed some light on two other creatures of the sea – the giant squid and the colossal squid. In their latest video, Washington, D.C. based Marsha and the Positrons shine a spotlight on these two fascinating creatures. Filled with lots of fun facts about these invertebrates, “Giant & Colossal Squid” is a fun science song from the album Positronic. The lightheartedness of the song is perfectly paired with a video that combines the live action band with animation and simple puppetry. The lyrics appearing on the screen as they are sung is an added bonus and helps listeners to catch all the details being shared about these fascinating animals. Add “Giant & Colossal Squid” to every animal lovers playlist.

Leave a comment marsha and the positrons, video spotlight

I’m Back – a Note of Gratitude!

Hello Friends! I’ve really missed you. The last five months have been – overwhelming, uncertain, worrisome, scary, aggravating, all-consuming, and so much more. As musicians, librarians, educators and parents we’ve been personally affected in different ways, but as a society, we’ve all struggled with how do I do my job now? How do I schedule my day? How do I meet all my commitments? Or, what do I do now that my commitments have disappeared? And, how casual is too casual for yet another Zoom meeting?

As I’ve mentioned before, I work in the Youth Services department in a public library. When we closed to the public at 6:00 pm on March 16, we truly believed we would be back in the building by April 1. Oh, what a surprise this virus had in store for us. Our challenges have included – how do I change my job from one that was based very heavily in in-person customer service, to one that had to be done exclusively online and completely from home? And not only from home, but without any of the resources I would normally have. And how do I prove my “worth” when I am not seen? Of course, just as we were really hitting our stride in the virtual world, it was time to think about returning to work. The struggle then was not only how do we go back to work safely, but how do we feel safe at work? And finally, how do we welcome the public back into the building in a way that is safe for all? Needless to say, these things took up much more of my brain space than I expected and Kids Rhythm and Rock had to take a backseat for a while.

One of the things that has sustained me all these months though is music. To relax, I listen to music from the 1980s. Mostly for nostalgia and just because it makes me happy. During our “current normal” (a phrase that a co-worker threw out the other day in lieu of “new normal”) I haven’t just been listening to music, I’ve been thinking a lot about it. This made me realize that there have been many, many factors in my life that have fostered a love of music, so I thought now would be a good time to share those and to say thank you. So, THANK YOU:

I learn so much from all of you. Thank you for continuing to make such wonderful, entertaining, educational, impactful music. I have a big stack of albums that have come out this year just waiting for me. I’m ready to dive back in now and look forward to giving them all a listen.

Thank you! You’ll be hearing from me again real soon.