2022 Children’s Music Round Up

Welcome to Kids Rhythm and Rock’s annual Children’s Music Round Up! For those of you new to the site, at the end of each year, rather than doing a “Top 10” or a “Best of” list, I compile a list of albums that have come to my attention during the last 12 months and separate them into fun categories. The total number of albums that are included varies from year-to-year. This year 45 albums make an appearance in the list below.

The richness and depth that is family music just keeps growing. 2022 saw the introduction of new artists, established acts returning after creative hiatuses, and veteran performers taking risks and trying something new. Let’s say hello to 2023 by taking a look back at the “year that was” in children’s music. All albums are available online. Don’t see your favorites? Please add them in the comments.

Sometimes it’s just more fun to sing with a friend.

Music in Spanish and English for the whole family to enjoy.

Oh, to be Young

Perfect tunes for the preschool crowd

Our Friends to the South

2022 was the year when music from Australia and New Zealand arrived on the scene.

This was always my favorite category on Jeopardy!

All of these artists call Chicagoland home.

The Children Are Our Future

These groups put young people front and center in creating and performing music that educates, entertains, and uplifts all those who listen to it.

Music to get you moving and grooving. 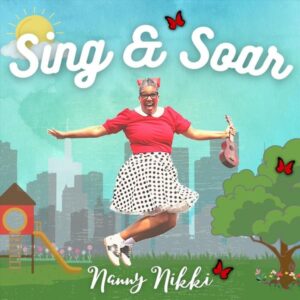 Sing & Soar is a wonderful introduction to Chicago-based children’s artist Nanny Nikki. This debut EP perfectly showcases Nikki’s gorgeous alto vocals as she sings about subjects that children can easily relate to. Several of the six songs in this collection are slow pop tunes with just a slight dusting of folk undertones, creating music that is upbeat but laid back at the same time. “Almost Made It” is a well-crafted track that with each verse tells of a progressively older child who is trying to accomplish something (potty training, encouraging a friend, making a basket) and remembers mama’s words of encouragement “Don’t give up/Don’t give in” and that she loves them. “Abczzz” is a catchy new take on the alphabet song featuring a guest appearance/rap by SaulPaul while “I Can’t Hear the Moon” is a beautiful lullaby about all of the wondrous things in life (the moon, stars, clouds, love) that exist but make no sound and leaves listeners feeling like they are wrapped in a hug. Also included is a remix of “Playground Day” from the GRAMMY-nominated album All One Tribe. This joyful song is a celebration of the many activities that you can do when outside – climbing, running, sliding, jumping, digging, riding a bike. Nanny Nikki’s first album really does as promised – it sings and it soars!

It’s hard to believe, but Halloween is only 13 days away! There’s really no better way to celebrate than with a song that’s spooky, kooky, and a whole lot of fun. The result of a magical partnership between kindred spirits Kelli Welli and Nanny Nikki, “Spooky Kooky Halloween Song” is no trick, just a treat. Joining forces, Kelli and Nikki created a tune that while never scary, still captures the essence of this haunted time of year. Children will especially enjoy the way each eerie sounding verse transitions into a chorus that demands that they dance around and be kooky. Get a preview of “Spooky Kooky Halloween Song” below then head to your favorite streaming service to add it to your list of Halloween favorites!